Disclaimers: The Lord of the Rings was written by J. R. R Tolkien.

I make no monetary profit from my fanfic.

THE LORD OF THE RINGS FANFIC

Waters of Serenity - Haldir goes for a moonlight swim - My second LotR fic.

Spirit of Lórien - Rúmil and Orophin comfort one and other over Haldir's death. (Author's note:  I know he didn't die in the books.  This was a challenge fic)

Elf Magic - Haldir and his brothers are captured by Orcs

- {Song of Lórien} - Celeborn is melancholy about Lady Galadriel's departure from Middle Earth. Haldir and the Lórien Elves desperately endeavour to lift his spirits

Tales Of Lothlórien - Some incredibly valuable, sacred Elven artifacts and items go missing from Caras Galadhon. Rúmil is the only suspect. He proclaims innocence, but is hiding something and learns a valuable lesson

Lest We Forget You will have to read the story for this one. I don’t want to spoil it

The Aftermath - Éomer finds Haldir after the battle of Helm's Deep

A Promise ~ A Hobbits Tale By Frodo Baggins - Frodo's thoughts as he travels to the Grey Havens with Gandalf, Haldir and the Elves. 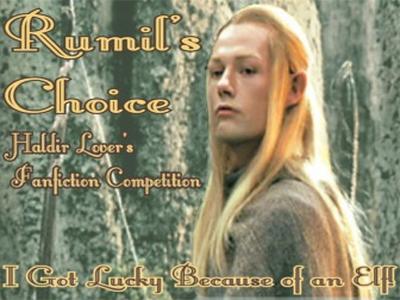 The Lord Of The Rings Dreams - Dreams I have had about various LotR characters (My dreams read like stories and most of them are quite a good read!)

Insidious Foe - While in Lórien, the Fellowship are set upon by a horrible foe

The Lord Of The Arches - Sauron's real plans for Middle Earth are uncovered.

Bathing In Lothlórien - Haldir has a bath

150 + Reasons Showing You Be Obsessed With Haldir, His Brothers, Celeborn and/or The Actors Who Play Them ...

THE LORD OF THE RINGS POETRY - {Please do not archive}

The Elf Lord - A poem about Celeborn

The Elven Brothers - A poem about Haldir, Rúmil and Orophin

The Grey Wizard - A poem about Gandalf

Dream Of The Archer - A poem of the gallant Galadhrim

{Discussion about Haldir, his brothers, Rúmil and Orophin and the actors who portray them} -

The Proud to be a part of The Haldir Council of Denial. {Qui-Gon Jinn has one *Hugs Qui* and the Gods from Xena have one *Hugs Hades*} and now Haldir does too! *Hugs Hallie*

Lord of The Rings & The Hobbit Pix

Lord of the Rings Pix

My Lord of the Rings Pix

Some cool Lord of the Rings sites

Apparently, Tolkien did begin to pen a sequel to 'The Lord Of The Rings,' but sadly, as far as we know, it was never finished. Would have loved

to have read it. ~ Here is a Youtube video about it:  https://www.youtube.com/watch?v=QNId0pPkX28

The Lord of the Rings Sound Files {Wav. Format}

Gandalf talks to Frodo about death and life

"Even the wisest cannot see all ends"

"A lament for Gandalf" {Legolas & Sam}

"Le aphadar aen" {You are Being tracked - Celeborn to Aragorn}

"Not idly do the leaves of Lorien fall..."

Aragorn's moving "Stand, Men of the West" speech at the Black Gate