Disclaimer: The Lord of the Rings trilogy was written by J. R. R. Tolkien.

I make no monetary profit from this story.

Author’s note. Please e-mail me if you want to see the ridiculous pic that inspired this hilarious fic.

THE FELLOWSHIP OF THE ARCHES

Frodo stared at the old Wizard.

"But how *can* he, Gandalf? How can he *do* this? Not even in my wildest dreams would I think that even the dark lord Sauron could be so evil!"

"It does not pay to underestimate him, Frodo," Gandalf said.

"We must go to see Saruman, the head of my Order."

Frodo nodded and packed some things including lots of food and a toy Elf.

"How could you do this?" Frodo asked, flabbergasted.

"It is the way of the future, young Hobbit."

"Who would want such a future? To destroy the forests ... Luscious Mirkwood, beautiful Lothlórien, ancient Fangorn ... Surely you *couldn’t...*"

"That is only the beginning. Soon the Golden Arches will rise all over Middle Earth ..." He looked evilly at Frodo. "There will even be one in the Shire."

"Tell me," Gandalf said. "When did Saruman the Wise abandon reason for madness?"

The evil Wizard hissed. "When I discovered the lucrative opportunity, the power... Every outlet will employ many, many Orcs ... We will ensnare the people of Middle Earth and control them ... Once they are under our spell, Sauron will rise again!"

Saruman’s eyes looked even creepier than usual. Gandalf and Frodo got the shivers, then made haste to leave while he went on bragging.

The Wizard and Hobbit arrived back at the Shire.

"Frodo, we must make haste to Lothlórien. It is the first forest on Saruman’s list. I have taken the liberty of arranging travelling companions."

The companions began to step out from behind the trees.

"Aragorn, Boromir, Legolas, Gimli, and of course you know Sam, Merry and Pippin."

"But I don’t know half of these people."

"You will by the time the journey’s over."

"Legolas has come from Rivendell. Elrond, Glorfindel and Lady Arwen have gathered a council for what to do about this new threat to Middle Earth. We must make haste to Lothlórien. I am sure Galadriel has foreseen this, but sometimes that mirror of hers can get a little edgy."

The Fellowship cautiously entered the woods of Lórien.

"My brothers and I were rather looking forward to some action."

Orophin stood brushing his hair, while Rúmil was madly trying to figure out one of those impossible linked metal puzzles.

"Come, the Lord and Lady are waiting." Haldir still did not sound too happy. He sniffed the air as they started to walk. //Wonderful …// he thought. //The Dwarf’s farted.//

"Tell me, where is Gandalf? Celeborn asked. "For he still owes me a re-match of hopscotch."

"He tripped over Gimli’s Axe in Moria and broke his ankle," Legolas said. "But he’ll be all right. He’s resting by the Nimrodel."

"Indeed," Galadriel said. "But great evil is afoot as well."

"I know. I saw it in my mirror this morning."

"All right then," Frodo said, rather miffed that he did not get to say his 'we must fight this horrid evil' speech.

"I saw that too," Galadriel said with a smile.

"The Fellowship needs to rest," Galadriel said. "On the morrow we will discuss Saruman’s plans."

After the Fellowship left, Haldir looked eagerly at Celeborn.

"Yes, all right, you and your brothers can return to your game of hide and seek."

The young Elves ran off excitedly.

"Come, My Lady, " Celeborn said to Galadriel. "We must finish our Pilates lesson."

"If you fart in bed…" Merry warned Pippin.

Pippin looked miffed. "Can a Hobbit not have any fun?"

"You never told me you had a-"

"I miss his big fluffy ears and-"

Aragorn shook his head. "I’m sure he’ll be fine."

"Yes, now get some rest. I have something I need to do."

Haldir and his brothers saw the Hobbits to bed.

"Aww that’s so cute!" he exclaimed when he saw Frodo’s toy Elf.

"Thanks. I’ve had him since I was five. Dad got him at the markets for me."

"Celdirlas? Did you make such a name?"

Frodo nodded. "I hadn’t thought of a proper name for him until I got to Lórien, but I was sick of calling him ‘Elf man’ and so I called him after Legolas, Celeborn and you, Haldir."

Haldir began to cry. "Ohh … that’s so sweet … Now if you tell anyone that I cried I’ll make you eat stale lembas."

"Ohh yes. I was naughty once … I stole Lord Celeborn’s favourite hairbrush and he made me eat stale lembas for a week. Trust me, indeed it is bad."

Haldir smiled. "Sweet Dreams, Frodo. "Now I’m getting mushy … If you tell anyone that I got mushy, I’m make you eat soggy lembas."

"Is that as bad as stale lembas?"

Frodo hid under the covers. Haldir reached under and ruffled the Hobbit’s fluffy hair.

"Don’t worry, Haldir," Frodo said, his voice muffled. "I won’t tell anyone you did that."

"Good. I was running out of lembas threats."

Aragorn returned the next morn with an odd looking item.

"This is what Saruman is planning," he told the others. "We must fight if we are to save our lands. We cannot let him destroy our beautiful forests for this fimut!" {Author’s made up Elvish word for "shit"}

The Fellowship and the Elves looked at the thing in horror.

All looked at him in astonishment.

"I will go first," Haldir said bravely, stepping forward, looking at the odd object. He took a small bite. No sooner had he done so, his face twisted in disgust and he spat it out. "Please excuse my manners..." he said," but never have I tasted anything so foul!"

He handed it to Aragorn. "I suggest we all take small bites," the Ranger said. "Otherwise it will run out."

"I advise against taking a large bite," Haldir said, gulping water from a silver chalice to rid the vile taste from his mouth.

Aragorn took a breath, then took a bite. He lurched and bolted, shoving the item into Boromir’s hand. The Gondorian warrior looked brave, but when he took his bite, he ran off to join Aragorn to vomit. He threw the item at Frodo. The Ringbearer took a deep breath before taking his bite. His face screwed up, but he managed to swallow, then he grabbed hold of Haldir’s chalice and drank and drank.

A hobbling Gandalf went next. "Good Gods of Old! Haldir, I heartily agree with you."

He passed the thing to Gimli, who stood his ground. The Dwarf took a bite and like Haldir, spat it out. "Even when I was captured by Orcs they did not feed us anything so loathsome!"

Sam took it and took a bite. "Even if I was starving I would not eat this putrid stuff."

"I am not sure I want to try it, but I must." Legolas took a bite and fainted dead away.

It flew up into the air and was caught by Gandalf who handed it to Merry, who shook his head emphatically.

Wearily, Pippin took the half eaten object from Gandalf and took a bite. "It’s honestly not so bad."

"But you’re right, Frodo," the other Hobbit said. "It’s evil and it must be stopped." And ate the rest of it.

By this time Aragorn and Boromir had returned. Legolas was still out cold.

"What was that thing?" Frodo asked.

"Apart from the fact that it is atrocious, I do not know. I was only able to obtain this." He handed Gandalf a piece of parchment. "Gandalf, you are the only one of us who reads this strange language. "What does it say?"

"My brothers and I have travelled far, and suffered many perils to bring news" Haldir said, "and the news we have is not good."

Legolas groaned and held his stomach.

"We were not able to obtain any vile items, but then again it is probably best that we did not."

"What are we up against?" Aragorn asked.

"We were only able to see some odd lettering."

Rúmil wrote it down. "Gandalf?"

Gandalf looked at it. "Three letters is not all that much to go on."

"We know, but that is all there was. We saw orcs, but did not engage them as we did not want to alert them to our presence. We did find out that Saruman plans to rip down Fangorn Forest for this atrocity and that it has something to do with fried chickens."

"He must be stopped!" Frodo exclaimed. "Who knows how many more of these monstrosities he plans to erect?"

"Well said Frodo Baggins," Gandalf said. "And we must warn the Ents."

The Ents all stomped after him to stomp Isengard.

Legolas smiled. "That takes care of that!" He dusted his hands melodramatically.

Gandalf broke Saruman’s staff in half. "You’re a very naughty boy" he scalded.

Saruman looked upset. "You didn’t have to break Snooky. I’ve had him since I was five…"

"If you don’t be silent I’ll blast you with Greenie." Gandalf raised his wooden staff.

"Damn you all!" Saruman yelled. "But hark! All is not lost. Sauron will not be defeated!"

"I’m afraid you are wrong, Saruman," Frodo said. "You are both defeated."

"That’s what you think, young, annoying, meddlesome Hobbit. You have no idea of Saruman’s power! This is only the beginning! Do you think he planned to stay with only two? Hah! Just think of what could do with pizza."

"What on Middle Earth is Pizza?" Haldir asked.

"I haven’t the foggiest," Saruman replied. "But it sounds good … and then there are something he calls tacos…"

"I’m not even going to bother asking what those are," Frodo said.

Saruman ran off into the woods cackling wildly, and accidentally dropped a red card as he ran. Haldir drew his bow, fired and killed him.

"Good shot," Pippin said. He picked up the red card. "Too bad he never got to claim his free large fries. Can I have them?"

Haldir snatched the card from Pippin and ripped it up.

"No you most certainly can not," Haldir said. "But Lady Galadriel is baking a round of low fat chocolate Lembas for us all."

The Elf of the Golden Wood was nearly bowled over as the entire Fellowship, including an awakened Legolas stampeded toward Lórien.

THE RETURN OF THE SANITY

Lady Galadriel’s chocolate Lembas did not last long, as she had foreseen in her mirror.

"Sauron’s evil has been defeated once more," Gandalf said. "I still do not know what madness possessed him."

"Too much MSG most likely," Celeborn said.

Gandalf nodded. "Could be. Either that or he was drunk on red cordial … But nevertheless the forests of Middle Earth are safe once more."

A round of deafening cheers ensued. Haldir had to cover his ears.

All ate, wined and dined for many days and nights and most were pissed as newts.

And in the end, all went their separate ways.

The Hobbits returned to the Shire, only to find the Sackville-Bagginses had painted Bag-End pink … and to spite them, Frodo and the ever faithful Samwise painted it green and brown again.

Legolas and Gimli toured Middle Earth, showing each other their favourite sites.

Gimli showed Legolas how to eat ‘red meat off the bone’ Dwarf style and Legolas taught Gimli the long coveted recipe for Lembas and threatened to cut his beard off if he ever told anyone.

And the Lórien Elves, including Celeborn, begged Galadriel to make more chocolate Lembas …

And so Eendeth the Third Age …

Author’s Note II: If anyone does know the Elvish word for ‘shit,’ do tell! :)

The awful pic which inspired this funi fic ... ;)

*Shudders* ... Sends shivers down your spine, doesn't it? 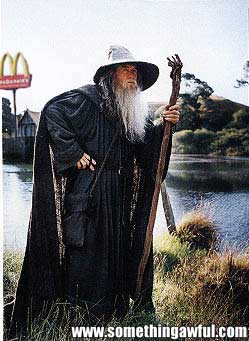 Back to Lord of the Rings Page