I make no ancient Greek drachma from my fanfic.  Damn it to Hades! ;)

A LADY IN HADES - Hades takes a lady to the Underworld

HERCULES AND THE ABDUCTION OF PERSEPHONE - The story of Hades and Persephone -  (In the style of the Animated series) – Recently edited.

DISNEY'S HADES DREAMS - Dreams I've had about Disney's Hades - Please do not archive.  (My dreams read like stories and most of them are quite a good read!) – NEW STUFF HERE!

Although mine is better and a lot more detailed, Here's Wikia's Herc Episode Guide too:

Seawave:  HADE, be nice to your nephew, or Zeus will toast your butt. 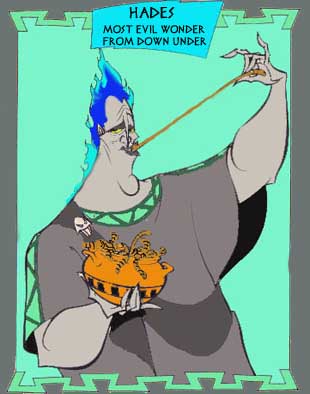 Does this mean Hades is actually from

And he's not really evil y'know!

Just take a look at my book Hades, the Truth At last, painstakingly transcribed by my pal Nancy Krulik, available from http://www.amazon.com Failing that, try http://www.barnesnoble.com or http://www.ebay.com

Though if you have the Disney book A Tale of Hades, by Evan Skolnick, 1997 (or know where to get it - or even downloadable scans of it), Seawave, Goddess of Fanfic, responsible for this way cool page is still madly lookin' for it!  Her e-mail addy is on the main page. There's also another Disney Hades book out - so rare even I don't know the name of it and Seawave's forgotten, so if you've got that or think you know what it's called, drop a line down to the Underworld. Promise I won't nab ya! But I may try to feed you pomegranates. ;)

Sea's also after another of these way cool T-shirts of yours truly.   (Even eBay has failed her.  Memo to me:  maim ebay after my meeting ;)

Sea's shirt ... well after such loyal lovin,' is lookin' well ... let's just say somethin' Cerberus dragged in ;) Here's a pic of it.  Oh, it's got my annoying, but adorable (did I say that?) minions, Pain & Panic on the back. Seawave needs the shirt XL or XXL.

"I'm a God, you fools!"  From "Hercules and the Comedy of Arrows"

>:*(   Sadly my Hades Yahoo group and other groups about Disney Hades kind of died and went to ... well Hades ... and Kerberos ate them ...

Xena?!  Bahhhh! Don't even talk to me about that frigging wench! Flamin' whiskey! Took me ages to get my hair right again ... Aiy! *Pouts and combs hands through the blue flames*

But the Hades from Xena Hades was Hel cool ~ Hey, of course!  Love the gear babe.  *Looks over to the other Hades* "Hey, Can I borrow your Hel cool blood red robe?"   *Toothy smile*

"Only if I can borrow yours," the other Hades says.  "I could get used to those cool, smokey robes."

Disclaimer II:  Yes, I know the real ancient Greece - and Hades are very different from Disney's version - (and some people find Disney's portrayal offensive.) I always knew Hades was never the bad guy, though I find the Disney version incredibly hilarious. This page was created for amusement and enjoyment and like Disney's Hades ... not to be taken seriously :)