I make no monetary profit from my fanfic

DEATHSCYTHE - Duo's thoughts on his Gundam

LET ME ... INTRODUCE MYSELF ... - The Gundam Wing cast introduce themselves...

LAST HOPE FOR PEACE - Zechs has a proposition for Duo 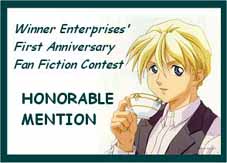 YOU KNOW YOU'RE IN LOVE WITH ZECHS WHEN ...

AFTER THE BATTLE - Zechs recovers from his final battle with Heero

"Why don't I show you something interesting..." Zechs

"Consider ourselves fortunate because we came out alive..." Zechs