~ Priestess of Loyalty, Friendship and Love

Clauddagh {Pronounced - Klaa-daa}  is born of the Star Wars Universe, a perfect balance in the Light and the Dark Sides of the Force.  Essentially she's both Jedi and Sith, born from the union of a Sith father and Jedi mother.  She's mortal and can really kick ass ;)  She's fiercely loyal to Hades and will defend him to the Death - and without mercy.  Her double bladed green lightsabre has Hades' name engraved on the hilt in ancient Greek.  The name Clauddagh comes from an old Irish legend.  A man was separated form his love for many years.  He fashioned a ring for her.  The hands represented his friendship for her, the crown loyalty and the heart his love.  When he returned, he expected her to have married, though he found that she had waited for him as he had for her.  Sweet story!  :) 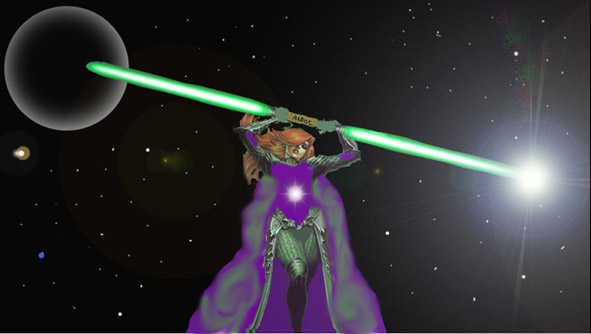 Clauddagh's image is based on Dawn form the Spawn comics, although she is my own character

~ Priestess of The Sacred Sword

Excalibur  {Pronounced  {X-cal-i-ba - short a and i}, is the soul (not blood) sister of Clauddagh.  She is younger and a little less mature than her sister, though she is a warrior and defends Hades just as fiercely.  At times, she comes across as harsh, as she cares for, and dearly loves Hades and would run herself through should anything bad ever happen to him.  The sword she carries is her namesake.  She is the guardian of Excalibur , the Scared Sword while King Arthur sleeps within the sacred Isle of Avalon.  Excalibur also chose her name. 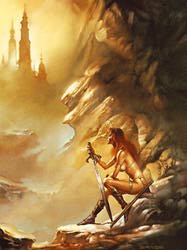 This image of a warrior woman is how I envision Excalibur

Though both soul sisters dearly love him they would never do anything to come in between him and Persephone, who they are also  sworn to protect.  Both sisters are fabulous friends with Celesta and have great Girl talks!

Clauddagh and Excalibur see themselves as the Guardians of Hades and the Underworld.  They were called to Ancient Greece to save Hades' life, at a time he was made mortal and endangered by angry mortals, who erroneously believed him to be evil, cruel and responsible for Death.   The sisters cared not that Hades' had lost his powers - they loved him just the same, fought valiantly to protect him.  Hades promised to reward them for their valour, though they took no reward, telling Hades that his life and soul were more important to them than all the riches of the Universe.  Hades became heartened that he was so loved.

Together the sisters fight to the death to protect their beloved God, for which he is ever grateful.

Back to Hades Page